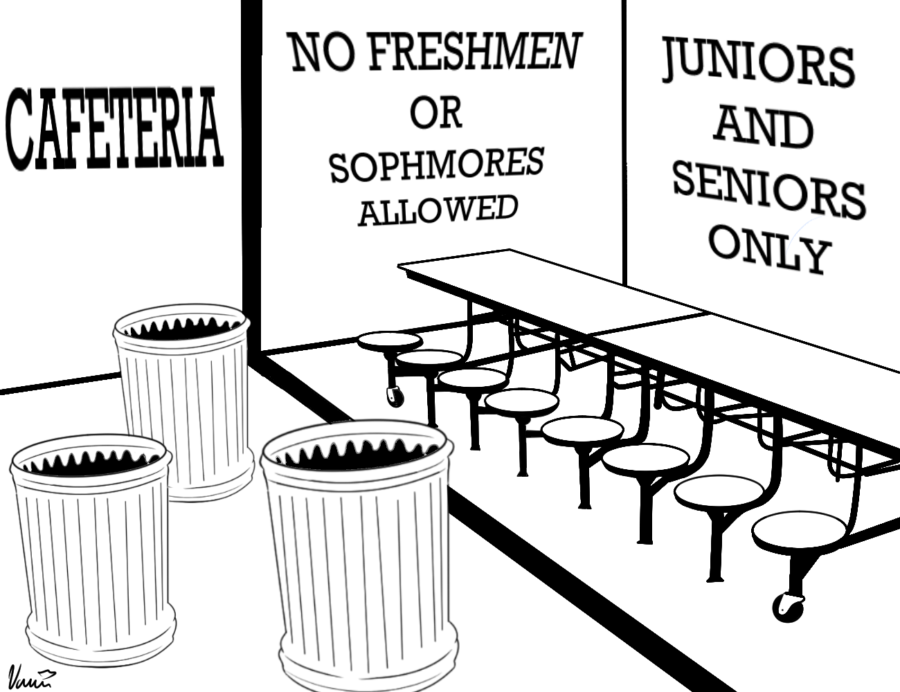 Cartoon depicting the discrimination of grade levels during lunch.

In the 2018-2019 school year, juniors and seniors can eat in the commons if their student ID is around their neck. Freshmen and sophomores are not allowed to eat in the commons, unlike previous years. “I feel that’s it’s not really fair that the other students get more freedom,” sophomore Ayanna Robinson said. “But I do understand because the younger students are kind of crazy.” Separating the freshman and sophomores from the juniors and seniors was a decision made with the hope of creating less chaos and noise. “I think it was fair just due to the fact that some upperclassmen typically don’t like the underclassmen because some are immature,” junior Daviyona Brooks said. All food is served in the cafeteria rather than both the commons and the cafeteria. Despite cutting down the need for more lunch equipment that can be used in the commons, the lunch lines in the cafeteria are lengthy. With all students lining up in the same place, it leaves plenty of time for fights to break out before the students break off to their respective areas. Students are questioning if the separation between the students is a good choice is overall. “It was a good idea because it shows that we trust the
juniors and seniors to be mature and responsible in eating in a new area,” social studies teacher Joshua Jablonski said. In previous years, the commons became over crowded, causing many fights and breakouts between students. “It was a really good decision because there were probably a lot of problems with the arrangements last year,“ sophomore Ayanna Robinson said. In previous years, students of all grades here at Benson were able to eat in the commons freely. So why the change? “We wanted to clean up the commons area a little bit and felt that maybe the upperclassmen would appreciate having a different place to take their lunch,” Principal Tom Wagner said. The decision wasn’t made based off fair or unfairness. It was based off more privileges and what was best for Benson and its students. “It was a decision made with the best interest of the school in mind,” Dean of Students Jason Rhine said. “Our rationale when making changes has always been what is good for our school and our students.” Overall, the work the custodial staff put in the previous years has decreased in the 2018-2019 school year. “We are trying to lessen the work that we have to put in on our custodial staff and kitchen staff,” Assistant Principal Casey Campin said. “We added more tables, but we still want to stay within the capacity of the cafeteria