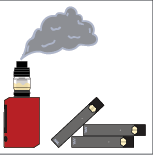 Vaping is a trend that has been getting more and more popular every year due to its presence in social media and use by celebrities. With its growing popularity comes its increase use among teens in the United states, including students at our own school.
“It’s definitely getting out of hand,” Senior Savannah Nelson said.
Vaping has been getting so out of hand at some schools, that some schools have started a ‘vaping patrol’, this was done at Freshman Emily Gibson’s old high school.
“You couldn’t go to the bathroom alone, because kids would vape in there,” Gibson said.
A lot of teens vape because they see their friends doing it, or they see celebrities doing it and think it would be a fun thing to try.
“Teens don’t care about cigarettes, it’s mainly vaping now, because they think it’s cooler,” Gibson said.
A survey has been done by The National Institutes of Health on the number of teens that vape, and it has gone up significantly in the past few years, with 37.3 percent of 12th graders vaping “any type of vape” in 2018, compared to the 27.8 percent in 2017.
The effects of vaping are relatively unknown, but that doesn’t make it healthy.
Teens ignore that their brains are still developing, and that a lot of activities that they do now, such as vaping, will affect them in the future.
“They say vaping is not as bad as smoking, but it’s still bad,” Gibson said.
Though it is true that both vaping and smoking are not good for you, sometimes vaping is just the healthier alternative, for teens who have learned or gained the habit by watching the people around them.
“I personally am concerned of the long-term effects of vaping,” Nelson said, “but at the same time, I grew up in a house with cigarettes and I’d much prefer my mom and friends vaping instead of actually smoking.”
Everyone has bad habits but hopping on the bandwagon and gaining a harmful habit to seem cool just isn’t worth it, especially when vape and e-cigarettes were made to help smokers quit smoking.
Teen related vaping has been in the news recently with President Donald Trump aiming to ban Flavored e-cigarettes, because of their popularity among young people.
This isn’t just a government concern, it’s also a state concern, as Autumn Sky Burns, Sarpy County coordinator for Tobacco Education and Advocacy of the Midlands aims to come up with a plan to lower the teen vaping rates in Nebraska.
Organizations are also concerned about the people. The Non-profit organization ‘Truth’ has a goal of having a smoke and vape free generation for the future.
There have always been concerns with teens and vaping products, but the concerns have grown in the past few months, especially with the vaping related deaths that have occurred.